Last July, I started creating more enhancements for Geany, which I didn’t expect to end up being many. Most of the patches (all actually) haven’t been merged to upstream, so I thought about creating my personal compilation for them instead, and it’s in geany-patches.

The changes I made basically became stable around August or September, but it was only now that I thought about creating the compilations when I rebased the changes to 1.29, and when I fixed a sneaky bug in the in-place renaming of documents.

The major features provided in these patches include the capability to sort document tabs, and the added commands, or the enhancements added to the commands (both in File-menu and in the Document’s context menu) that enhances opening, closing, saving, reloading, renaming, cloning, and deleting of documents. See README.md for the complete list of changes.

These are some of its screenshots: 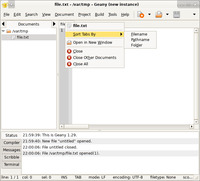 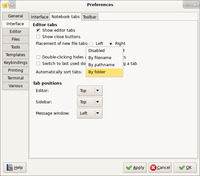 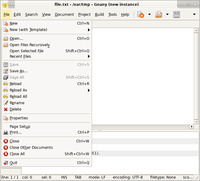 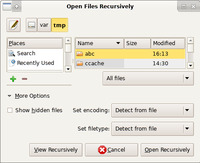 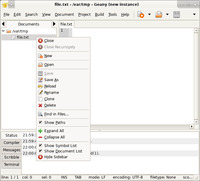 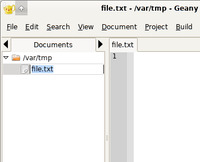 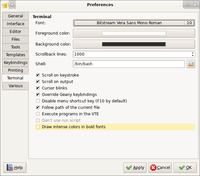 If you’re using Gentoo or any of its compatible distros that support layman, you can build and install the package along with my patches by using my overlay, and enabling the konsolebox USE flag:

Directly getting the patched source code

If you like, you can directly fetch the repository where I apply the patches, or download it in a ZIP archive with Github.

Testing branches tend have more recent updates, while the master branches are more tested. But sometimes they’re just patched together when a critical bug is needed to be fixed.

The suffixes like @1.29 refer to the release version of Geany, and the patches are rebased against that version. These branches don’t include the upstream changes in Geany that were made after the release, unless I explicitly forward some of the critical updates to them.

The branches without those suffixes on the other hand are meant to be updated with the recent changes upstream.